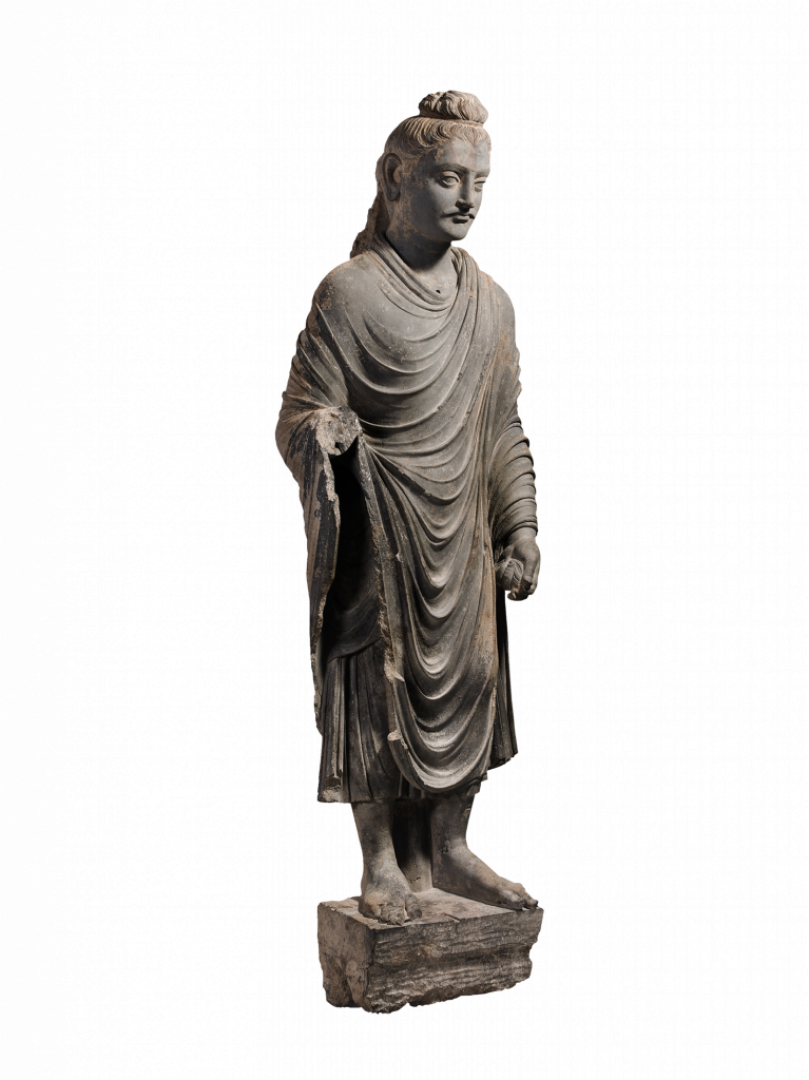 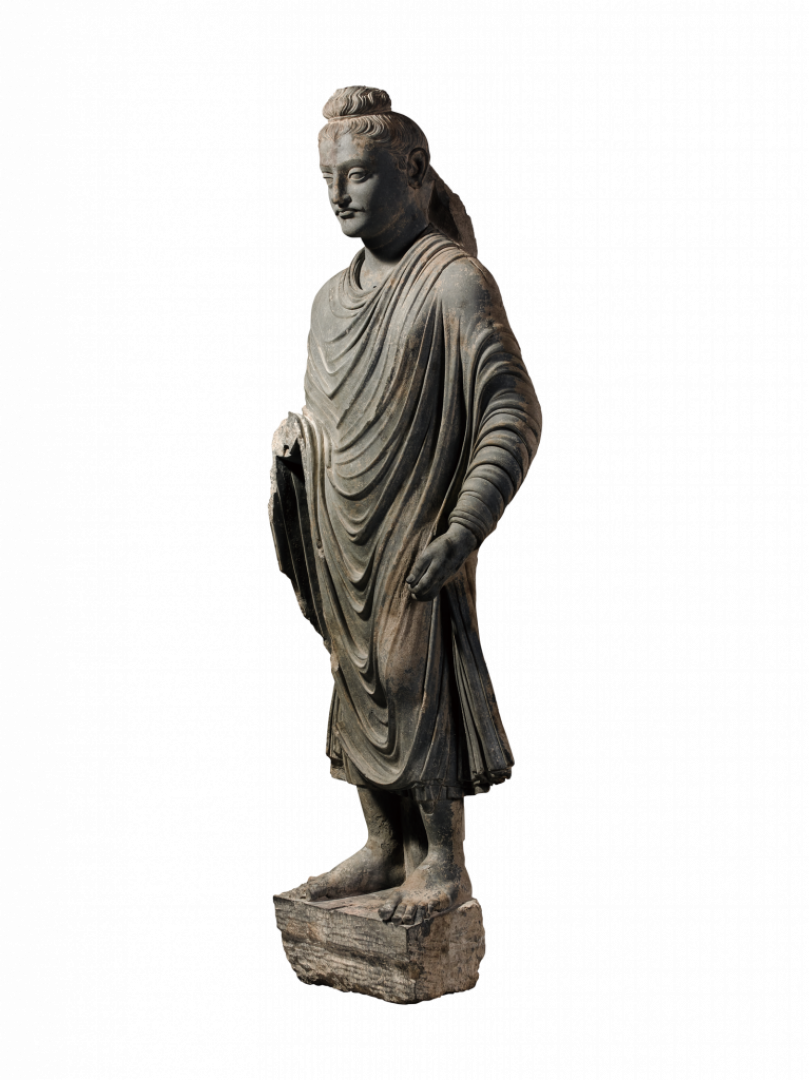 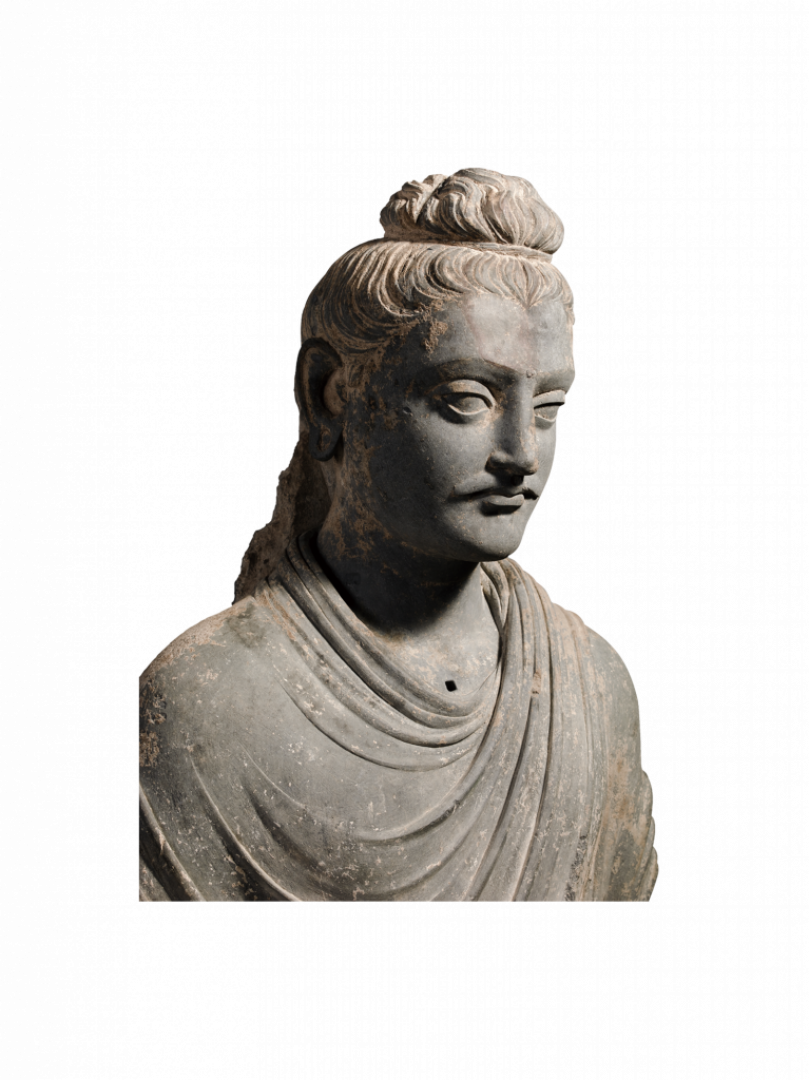 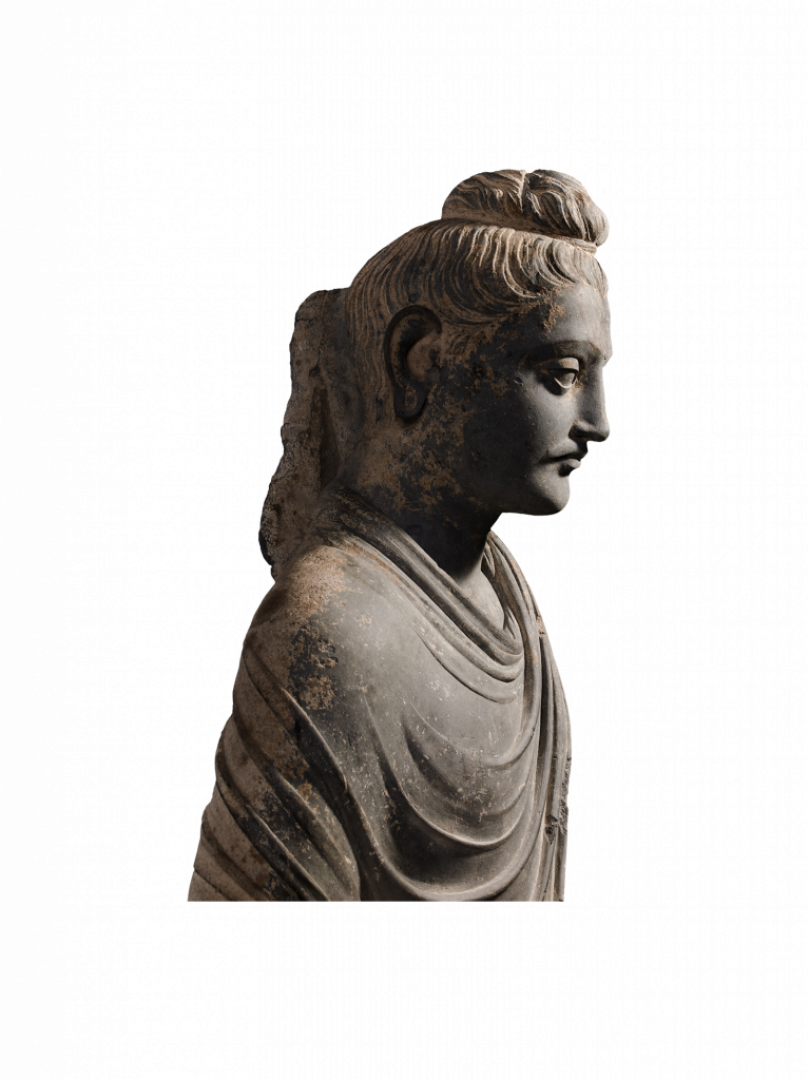 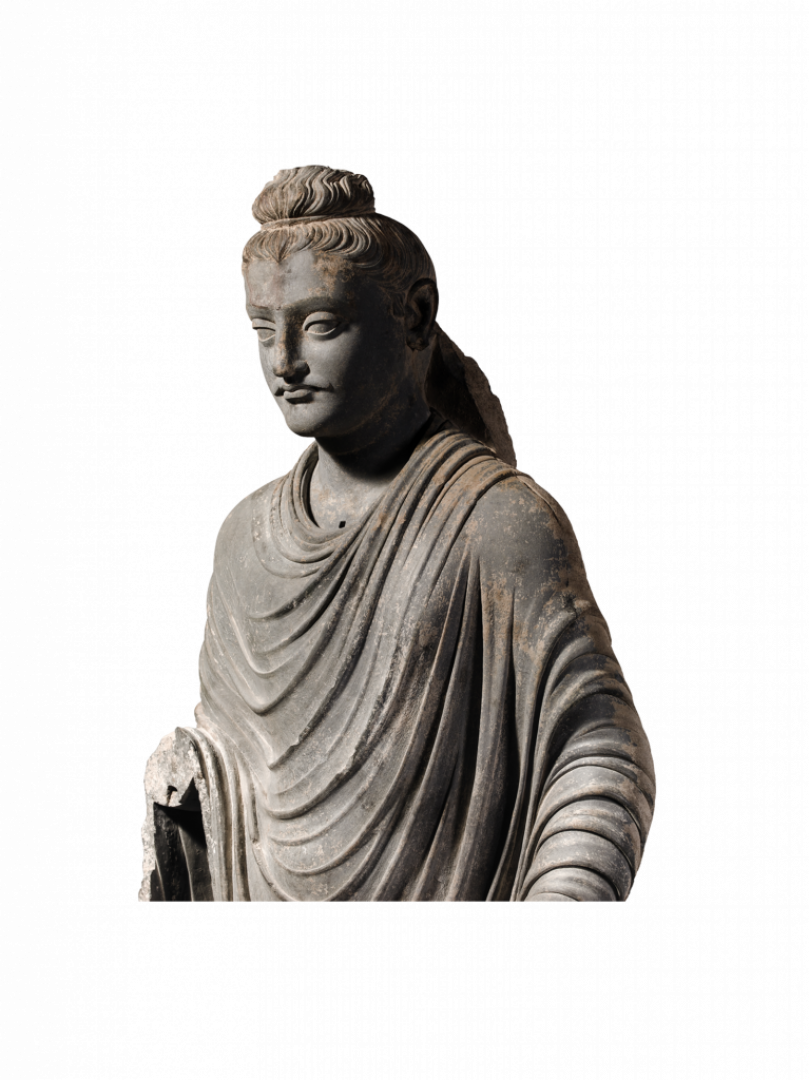 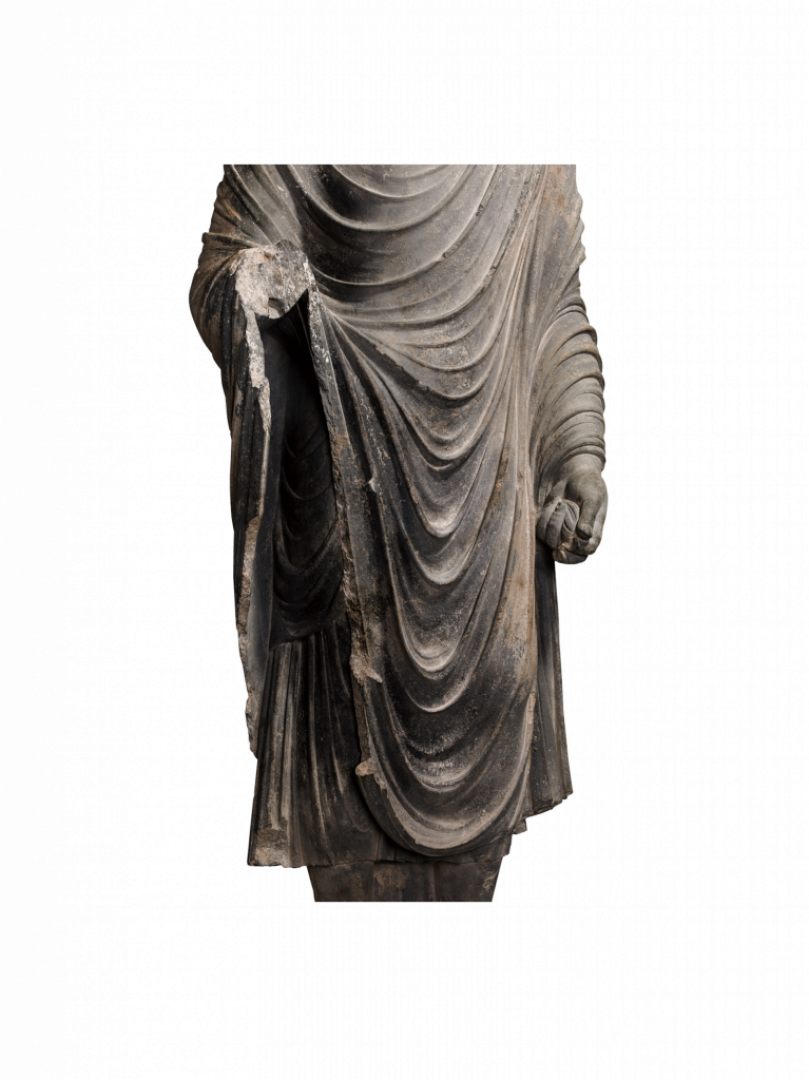 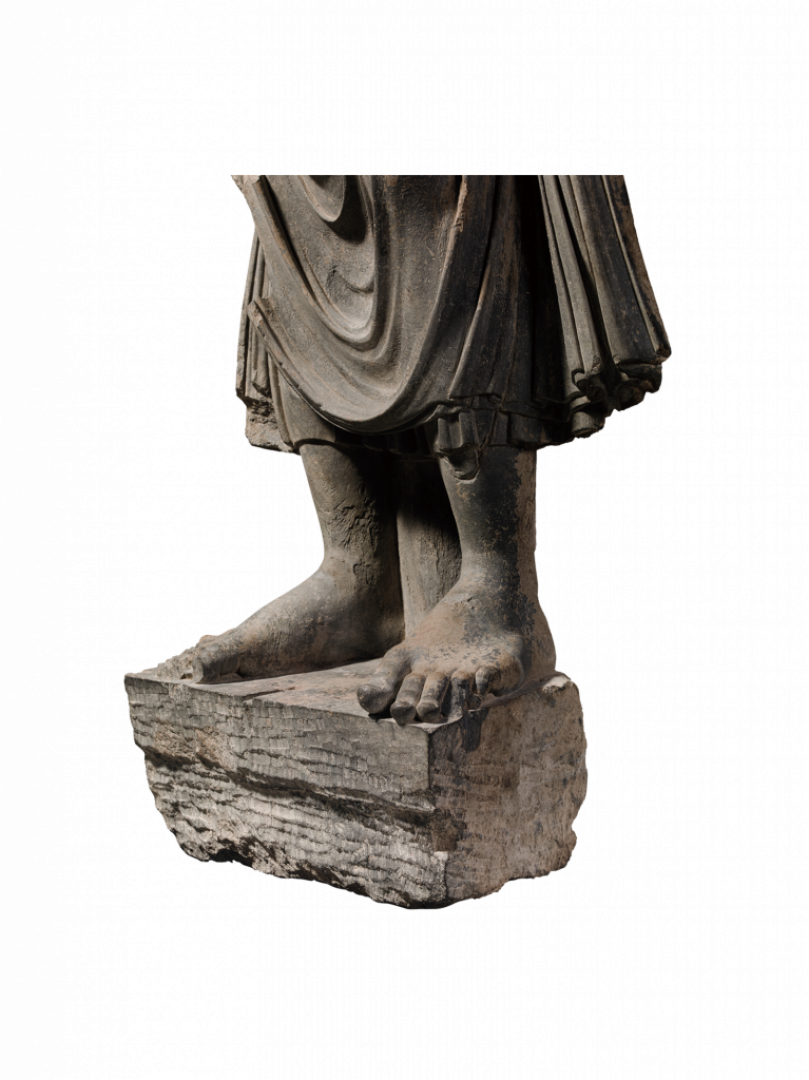 Gandhāra is one of the important sites witnessing the development of Buddhist art in the Kushan dynasty. In addition to being the meeting point of Eastern and Western civilisations, it also drew on the characteristic elements of Indian art, and integrated them into its own Hellenistic art tradition. The art vocabulary of classical realism was adopted to interpret Buddhist stories and the images of Buddhist deities, and thus formed the anthropomorphic representations of the Buddha.

This standing image of Śākyamuni Buddha has an oval face, a tall and rounded cranial protuberance (uṣṇīṣa) under elegant wavy hair, and a fine cord tied around the topknot. The depiction of the countenance bears strong Greco-Roman artistic flavour. The facial features are represented in vivid relief as evidenced by the high straight nose and protruding brow ridges. The eyebrows are relatively low and the large bright eyes are slightly downcast. A thick moustache covers the upper lip. The expression bespeaks solemnity and dignity. A long dhoti is worn under a thick over-robe, or saṃghāṭi, that covers both shoulders, featuring vivid drapery with prominently ridged folds. The sculptor had inherited the technique of Greco-Roman art in the minute modelling of the depths and turns of the folds to echo with the muscular nuance of the human body. The overall drapery is spontaneously rendered and rhythmically spaced, faithfully suggesting the figure vaguely hidden underneath the fabric.

The statue has a robust build and strong chest muscles. The damaged right hand was originally displaying the ‘fearless gesture’ (abhayamudrā) while the left hand extends downward to grasp a corner of the hemline of the over-robe. The statue is standing barefooted on a square pedestal. The left leg is slightly flexed while the right foot points a bit sideward, thus shifting the centre of gravity a bit to one side. The posture bespeaks leisure and ease. The near-life size, well-balanced bodily form, vivid expression and realistic details of this statue have rendered it a masterpiece of the statuary of the late Kushan dynasty.